Look up at the sky, it’s a bird, it’s a plane, nope it’s an Air Swimmer Shark! A swimming air what!?
The sharks are being seen everywhere, it kind of makes you wonder…hmmm, where are they going? Where’s the party at?? 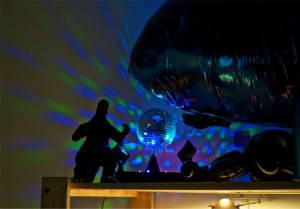 A pilot of a passenger jet was descending to Christchurch International Airport around 2pm on Boxing Day (December 26th) and radioed ground control because he spotted something very unusual –an Air Swimmer Shark flying at several thousand feet.
The Hamilton pilot Evan Yates said he flew past one in his small Robin aircraft two days later.
“I thought it was a helicopter but then I noticed it’s got fins and a tail!”

Apparently the Air Swimmer Sharks do have a mind of their own; we’re getting reports of fish escaping as soon as the presents were unwrapped!

A woman by the name on Kim Clarke said that her Remote Controlled Flying Fish didn’t even make it to gift-giving.
“I went to the store to get it filled and got it to the car. I made it home –but as I got it out of the car, a huge gust of wind swept it away….I had no chance”.

A Hamilton resident also lost his Air Swimmer Shark but this time on Christmas Day, before his grandchildren had a chance to play with it. The shark was fully set up in the morning but it floated through the kitchen and lounge, up a flight of stairs and across a bedroom before leaving through the bedrooms external door.

Is it a Dangerous Toy?

Luckily the air swimmer sharks are not a huge threat to aircrafts due to the fact that they do not have enough mass to do any damage. But then again, the air swimmer shark can startle the pilot and cause a heart attack or something to that extent, so try to keep them indoors for the pilots’ sake.

I’m telling you, there must be something in the Air Swimmer Shark and clownfish’s helium…