Inflatable Sharks Cause Havoc in Skies

Inflatable Sharks are causing humans trouble all over the world for some reason.

“Well finally tonight, a popular Christmas gift is proving to be a startling success and among those startled are pilots, who report seeing inflatable sharks that are remote controlled -helium filled and according to the manufacturer they are only meant to be used indoors.

Over the summer the headlines are full of shark sighted in the water, but this holiday we have a new type of shark sighting, in the air. Inflatable Sharks
Have you heard of any getting away on people?

Yeah, a lady came in this morning and she had filled it up then someone opened the door and it ran out the door. And away she went, gone.
Gone and that’s the problem, filled with helium sharks and other assorted fish are escaping. The Christchurch pilot even repotted seeing one out his window on Boxing Day, but passengers needn’t worry. 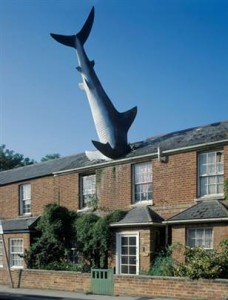 If you’re driving along in your car on the motorway and you see a piece of paper blow under your car and you feel a woosh under your car and out the back. Now your car is about 1 ton, what we’re dealing with is a 40-50ton aircraft and you won’t even feel the woosh.
Smaller aircrafts are also safe, the helium in non-explosive, pilots fear birds more. The Inflatable Sharks simply keep them on their toes.

The really good thing about all of this is that quite clearly people are looking out the window. We get a lot of reports that pilots are not doing what they should, which is look out the window.

Many New Zealand stores have sold out and overseas they are also proving popular and equally…as evasive. “

Be sure to hold onto your Inflatable Sharks because it’s an expensive item!