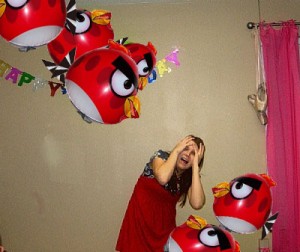 The WMC team made a really smart decision by getting involved with the Angry Birds niche. As of 2012, stores are launching more games, toys, posters, and etc all for Angry Birds.

The WMC will definitely see an increase in demand on the new product when it gets launched in public due to the fact that the popular kid’s game is well in fact, popular. Everyone who has a computer or cell phone knows about the popular franchise so it’s only a matter of time until some Air Swimmers Angry Birds fan flies it in public (at a convention, expo of some sort) and people will stand and awe at how it just suspends in mid-air and easily takes action when controlled.

This will make them fans of the product as well.

The shark and clownfish models are still great toys. The Air Swimmers Clownfish is actually the most popular out of them all probably because of its multiple vibrant colors on its body. The shark model is the coolest of them all in my eyes, mainly used for pranks but the shark version is simply just awesome at conventions and expos because of how big and ferocious it looks.

The Air Swimmers Angry Birds is not even out yet so I can’t really compare them to the other two but from the looks of things, it’ll be a tight completion between the three.