First of all, let us not get confused with the air swimmers teaser video which was posted by xzylo half a year ago. Although on a side note, I just checked back on that video and was shocked to see an additional 6 million views. The RC Shark and Clownfish are getting really popular.

Back on topic, the video I’m talking about is the air swimmers advert made by Toys R Us a couple months ago. Somehow all the fish attacks are done in the living room for some reason (probably because it’s the most spacious area in the house). 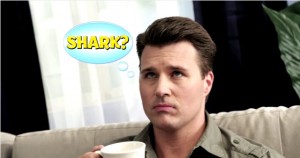 Both of the fathers in the Febreze and the Air Swimmers Commercial are sitting on the couch and reading a newspaper before they get startled to death. Which I think is funny.
Other than the obvious fish floating around, I also realized that both the videos have cats.

Maybe you’ll spot some similarities in the videos when you watch them. The overall “feel” or should I say the ‘home’ environment with the fish floating around makes it feel similar. Toys R Us did a good job on the video, straight to the point and promoted the shark and clownfish in a very fun way.
Overall I like the air Swimmers Commercial